The journey to the Last Volcano.

Tower Hill is the remains of an extinct volcano about 20 kilometres west of Warrnambool on the southwestern coast of Victoria, Australia. Within the crater of the Tower Hill volcano lies a smaller, newer volcano. The Last Volcano. This is the story of a journey to the Last Volcano.

My wife and I love to do things together, but in the last few years I wasn't able to walk far any more. So we had invested in an Overlander electric off road wheelchair made by Terrain Hopper in the UK. We have also become Australian agents for them.

The first bit was pretty straightforward. Up a short path to a sign that said 'Journey to the Last Volcano'. That looked interesting so off we went. We didn't realise just how interesting it was going to get! The video shows that the walking path was not difficult and we had a pleasant time chatting.

Early in the walk the track was easy and we had a very pleasant walk.

Trudi wanted to photograph some flowers and I kept going for a bit and then waited for her. But there was more than just flowers there. She followed a noise in the bushes and found a large bobtail lizard! 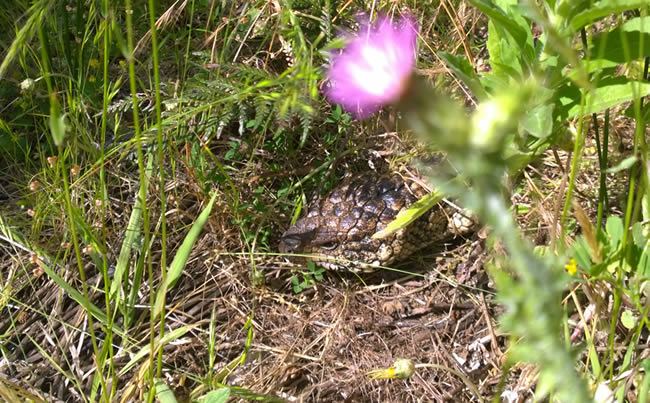 Trudi was surprised by a large bobtail lizard when photographing flowers. She heard a rustle in the bushes and found this fellow.

It became darker and colder and the wind began blowing. No rain, it passed by a little way to the right. A right turn in the path led to a steep climb up to the rim of the Last Volcano. We passed it by and followed the track to a very steep and forbidding descent. 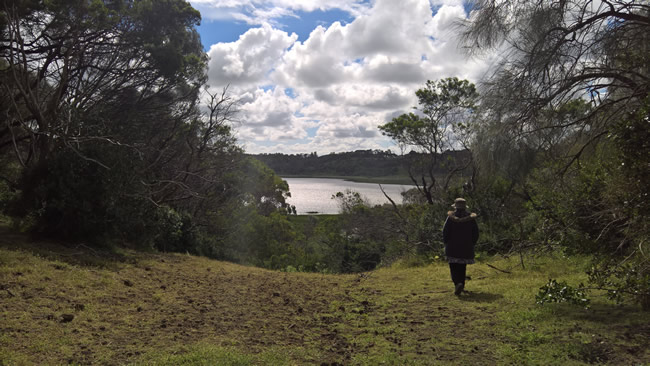 Too scary for me! Keep that one for another day! We turned and went back to the path up to the rim of the volcano. It was probably the steepest and longest climb I had attempted in the Overlander, but it had no difficulty in reaching the top. Great excuse for a video, so I turned and went down and back up again.

The slope up to the rim of the Last Volcano was no match for the Overlander.

The sign at the top pointed right and said it was just 960 metres back to the visitor information centre. We turned left to follow the path to the highest point of the rim. That was worth it. Some of the sights were amazing! The sun had come out, but the wind up there was boisterous. 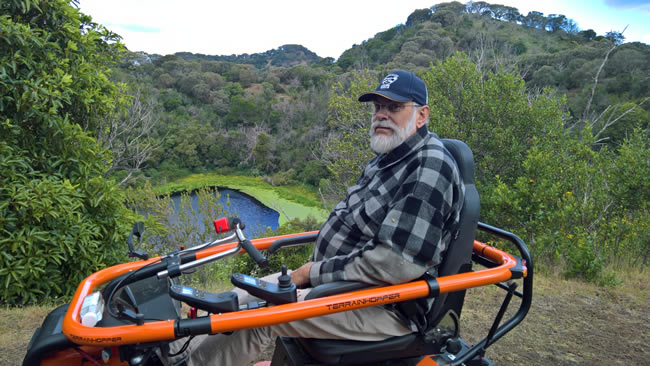 Along the way we saw a couple of tortoises. One of them seemed to be digging a hole in which to lay its eggs. 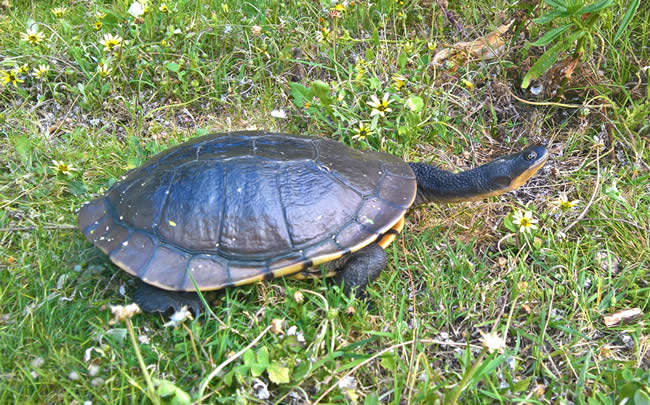 This was one of several tortoises we saw on the journey to the Last Volcano, Tower Hill, Victoria, Australia

Going down the slope was easy, which is quite different from when I was walking. Downhill slopes were difficult and dangerous for me to walk. Halfway down an echidna walked across the path. Quick as a flash Trudi had her camera out to video it. I just stopped and watched.

An echidna crossing the track.

A few hundred metres down the track a couple of kangaroos stopped and watched us for a few moments and then hopped away. From there it was an easy walk up to as sign that said '

Ah! we said. Nearly there. We'll be back in time for a coffee! Yeah right!

If you are in a wheelchair and you cannot get out and walk, or if you are alone without assistance, turn back at this point. You will not be able to make it through.

It started off innocuously enough. The track was wide enough and not too steep. Yet. Around a bend and there were steps going down. Steps made of a heavy piece of hardwood with dirt behind. Not all were in good condition. Ah well, in for a penny in for a pound! We kept on. Trudi leading the way. Slowly edging over each step and then the next.

There was a rough handrail, and the track made a nearly 180 degree switchback. I got out and we manhandled the Overlander around the corner. 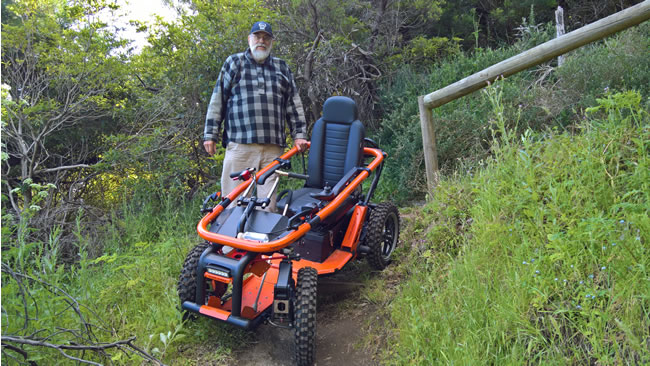 The 180 degree switchback was impossible to navigate so I got out and we manhandled the Overlander around the corner.

The steps got steeper. Individual steps had higher faces. Around another tight corner without needing to get out. Just. It was getting quite scary at times. A steep downhill slope to the right had me worried. What if we started to slide, or to roll? I don't like the thought of going on a sideways slope, especially not if there is a steep downward slope on one side.

A bit steeper and a little scary because of the steep slope down to the right. But we got there OK.

It was a bit scary, but we got through. Well, that was the worst of it! Yeah, right!

The track became narrower, with the steep slope off to the right getting closer. It was getting too dangerous to stay in the Overlander just in case it started sliding down the slope. So I got out and we inched the Overlander down the track, with Trudi manning the controls from the front and me steadying the Overlander - and myself! - from the rear. Only about 50 metres and then the track was safe enough for me to drive the Overlander again.

Still a few steps, but these seemed easy now. We came to the toilet block and decided to make use of its facilities. Though we had to argue the point with flotillas of aggro mosquitoes!

We entered the clearing to the information centre. But it was after hours and it was closed. So no coffee! On the way back to the car there were several emus. Trudi, quick as ever with the camera, got some good shots. 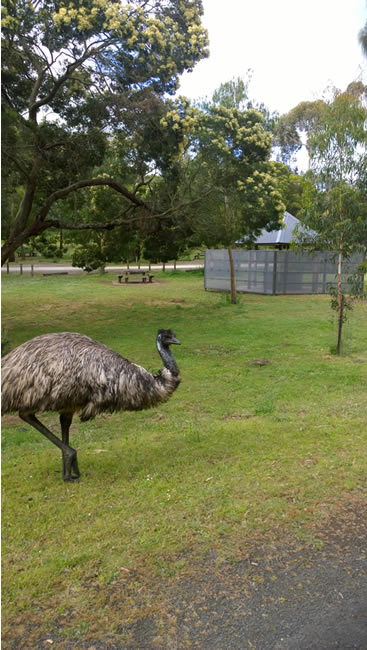 Just near the car, an emu. Tower Hill, Victoria, Australia. Actually there were several, heading off into the bush.

Trudi kept saying through the whole walk 'This is awesome!' She was right!

We got to go on an adventure together, which we had not been able to do for decades. I went to places I just could not otherwise have gone.

The Overlander 4ZS by Terrain Hopper is an awesome machine!

So we finished the journey to the Last Volcano. And in the process we circumnavigated it!